The trial lesson has come and gone, and I can say that it was a success!

The cut off date for registering for the event was the Friday before, September 30. On Friday morning, I had four people registered for the classes, two in the morning and two in the afternoon. By the time I had gotten home from work, around six, I had 10 people signed up for the classes! I would have five in the morning and five in the afternoon. I thought this was the perfect number of people for my first time -- not too many and not too few.

In September, there was a large typhoon that went through the southern part of Japan. It was extremely slow moving and dumped large amounts of rain on the area. Along with the strong winds that come with the typhoon, many of the flowers ready to be picked for selling were destroyed. The flower shop had called around to different flower shops and distributors to find the flax, but they had no luck. What was I going to do?

I scrambled around the flower shop and finally decided, about an hour later, that I would use a Japanese willow, Kouri willow, instead of the flax. It was a more difficult material to work with, but it was the only thing that I thought would work and would still be in my budget for the price of the flowers. I hoped that it would work out in the end.

On Sunday morning, I woke up bright and early and got ready for the classes. I ran by the flower shop, picked up the materials, a headed over to the place where the classes would be held. I got the room ready, set out the containers and materials, boiled some water for tea and coffee for after the class, and was ready for the trial students to come.

The morning class went well, but as I had thought, the willow was a bit difficult to use. Everyone used the same materials -- three willow branches and two ping-pong chrysanthemums -- and same containers, but everyone had an original arrangement by the end of the class. For a first-time student, they all did a great job!

The afternoon class also did a wonderful job. Again, all the same, but all a little different.

A local newspaper also came to the afternoon class to do a short story on the class. Nothing like this has ever been done in this area before, so the journalist was very interested in the class. 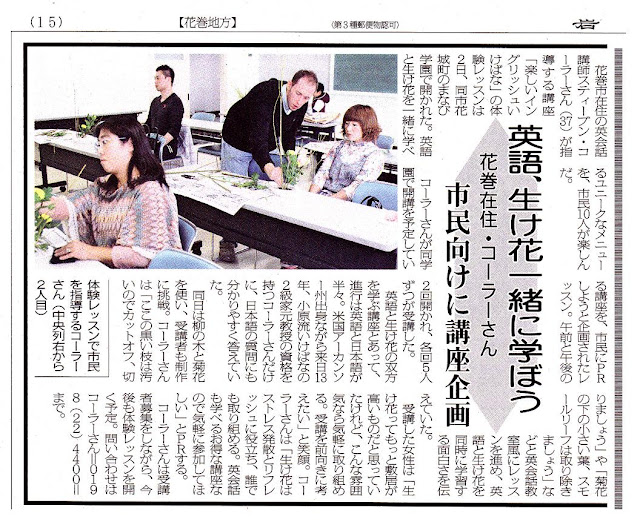 For those of you who can't read the article, it says that I am a wonderful teacher and have magic hands when it comes to ikebana.

Just kidding! It talks about the class and what we did during the class. It is a very nice article about the event.

I had lots of positive feedback on the classes and have four people who want to start taking lessons. Because of the positive feedback, I have decided to do another trial lesson this month on October 22. But this time, I'm going to do the classes in Japanese. I thought there might be some people who would like to try ikebana, but they don't want to do it in English.