I thought since I made my mom an arrangement for Mother's Day, I would make my dad one, too.

When I was young, my dad was a tractor mechanic. He was amazing with any type of machinery and could fix anything. He loved cars, different kinds of tools, even got into a bit of carpentry. He could do anything in my eyes. And me, I couldn't do anything! He taught me how to change the oil on my car, but it was a painful process for the both of us; and more than once, a few choice words were said by my dad. If there was anything wrong with any of the family's cars, he would always fix it himself. All you had to do was describe the problem, and he would know what to do to repair it. Because of him, my sisters and I always had a working car to drive when we were young.

We lived out in the country on 120 acres of wooded land. There was a small field near the house that used to have cows graze on it, but there weren't any when I was growing up. Every summer, he would get on the tractor and mow the field. It always smelled amazing! We lived on a dirt lane that was about a mile from from the main road. He would also mow along the lane creating a beautiful path through the woods.

He never drank coffee (and still doesn't), but always drank Mountain Dew. Whenever he would go out, he always had a cap on his head. I also remember him having a toothpick in his mouth most of the time, even while watching TV. He was a true country boy. And he still is.

So, what kind of flowers to give a country boy?

Hosta leaves grow all over the place here, and they sell them all summer long at the flower shops. A simple, yet beautiful leaf with lots of character, just like my dad. I thought that sunflowers would go well with the hosta leaves -- a touch of sunshine reminding me of the summers with the sweet smell of fresh cut hay. Simple materials for a simple arrangement that evokes the feeling of country to me.


One main leaf stretches out over the water in the container, casting it's reflection on the surface of the water. Another leaf was placed low and in the front to bring a focal point to the work. Two sunflowers were used, but because they were both so large, I used them rather short in the arrangement, using them as a filler material rather than a main material. One of the sunflowers is almost hidden below the front hosta leaf, just peeking out, creating some depth in the arrangement. And then the last hosta leaf was placed in the rear of the arrangement with the back of the leaf showing, giving full play to the beautiful line of the leaf. 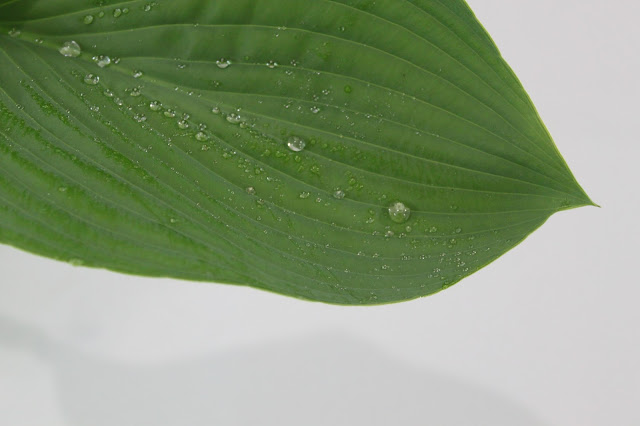 I also sprayed a little water on the hosta leaves. The water pools up into little beads giving a cooling effect to the viewer. 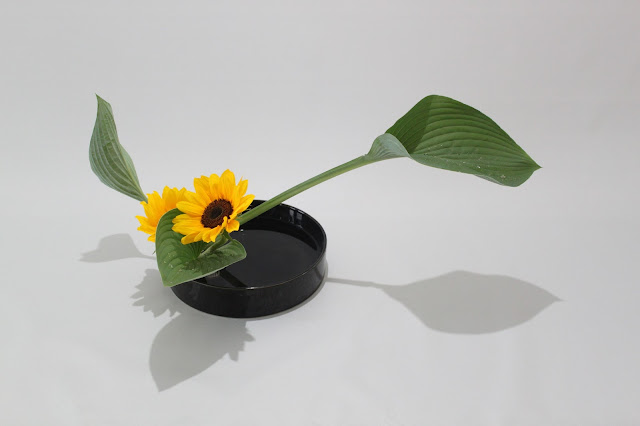 I wish I could be there in person to give this to him, but an ocean separates us.

Happy Father's Day to a wonderful man that can still do anything in my eyes.

Nageire -- Flowers "thrown in" a Vase

An arrangement in a vase is called nageire, literally "thrown in".

In the Ohara School of Ikebana, there are many techniques used to place the materials in a vase. Because there is no kenzan to support the stems, the way the stems are cut, how they are bound with vertical or horizontal stays, and the way they cross over each other to lend support is very important. To be proficient in these techniques takes many years of study.

When I first began to do arrangements in vases, some 13 years ago, I didn't like it. You could even go so far as to say I hated/dreaded it! Why? Because it was so difficult to make the materials stay in the place you wanted in the vase. I would go to my lesson, excited to do an arrangement; and then, my teacher would say we were going to do nageire. I would immediately want to go home and forget my lesson for the day. But, as I did more arrangements in vases, I learned the techniques and methods used to support the materials in the containers. Gradually, I began to like doing nageire. Now, I love it. It is one of my favorite types of arrangements to do. 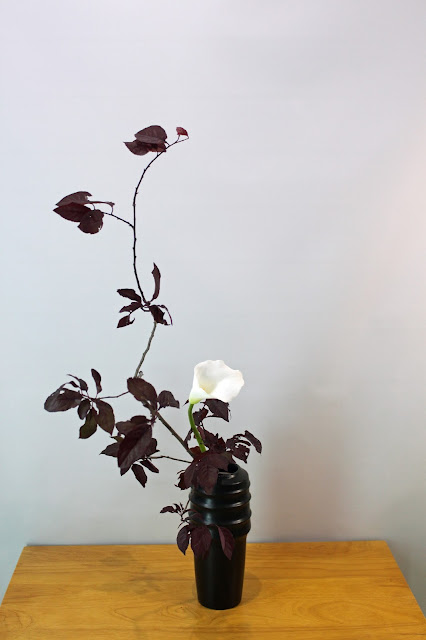 When looked at from the side, you can see how far it reaches out in front of the vase. This helps to pull the viewer into the arrangement, but it is not noticeable unless you look at it from the side. One of the magic points of ikebana. 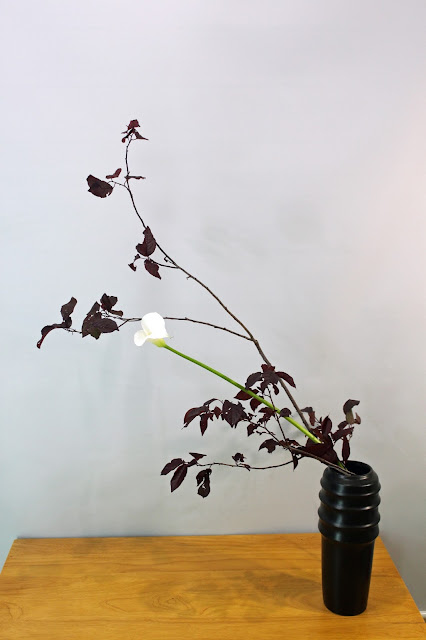 I hope you enjoy the video of how the arrangement was made.

As always, feel free to leave a comment in the comment section below!
Posted by Unknown at 8:54 PM 4 comments: