The Big and Small of Ikebana

I was planning on getting this post up earlier in the day, but it was a beautiful day here -- the first real day of spring this year. It had been cold and rainy all last week. But this morning when I woke up, the sky was a brilliant blue without a cloud in the sky. I had to go out in the morning, and I was surprised to see the cherry blossom trees in full bloom! I guess they thought it was time for spring to show herself, too. I had the windows and door open all day, and it was wonderful! I hope that I can get out tomorrow and get some pictures to share with you later.

This time, I wanted to share some pictures of Moribana.

Moribana was originated by the First Headmaster, Unshin Ohara. It's an ikebana where the materials are arranged as if they are piled up in a low, flat container with a large surface of the water showing. Many other schools of ikebana also have a Moribana style, but it was originated in the Ohara School of Ikebana.

The most basic style in Moribana is the Upright Style. It expresses the beauty of materials that stand upright. The three principal stems are arranged to form a scalene triangle with all other materials acting as filler stems. 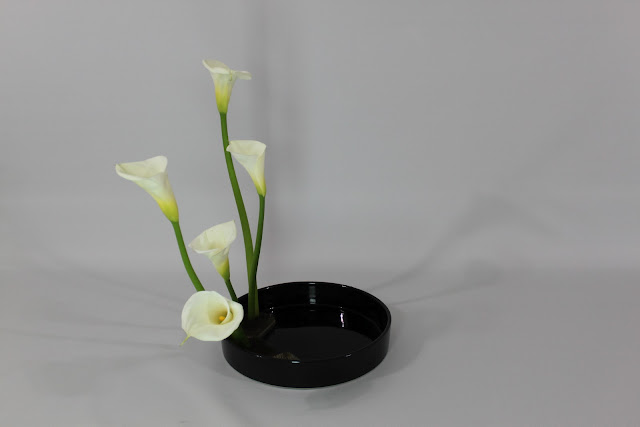 Five stems of Calla lily are used as the subject and secondary material. The tallest stem in the back is the main stem of the arrangement, the subject, with the stem angled out to the left being the secondary stem. These two form the first two points of the scalene triangle. The other three stems of Calla lily are arranged to give the group a sense of movement and interest. 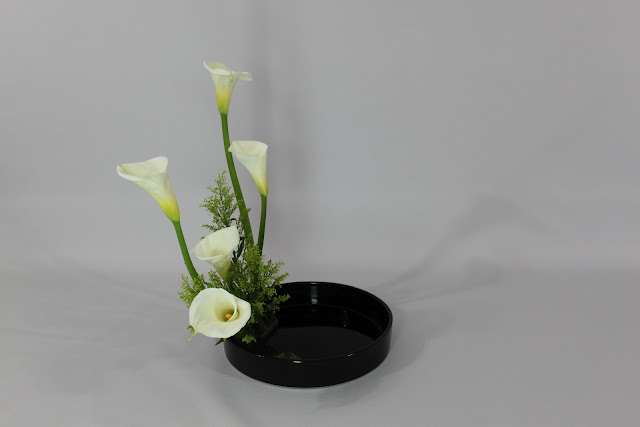 Because the lilies have no green leaves, three stems of Solidaster are used to fill in the base of the group and to help cover the kenzan. 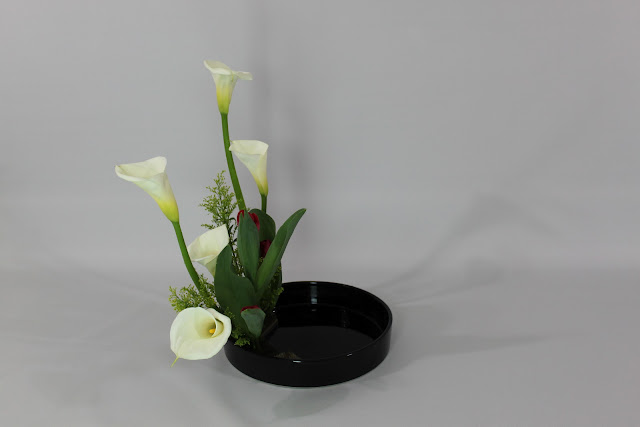 Next, three Tulips are added as the mid-filler. One is short in the front, one is tall in the middle, and one more is short in the back. The three stems form a mountain shape when viewed from the side. 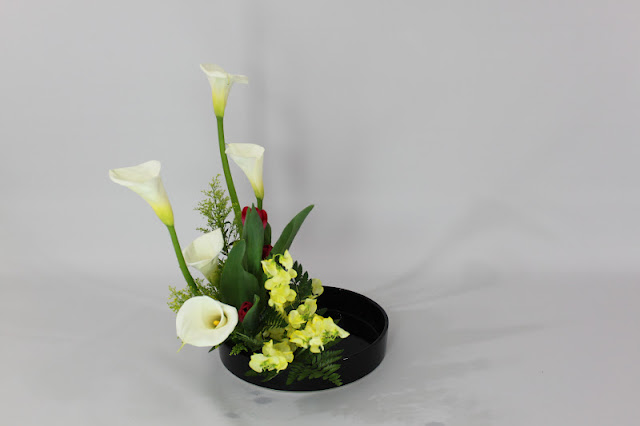 Last, five stems of Sweet Pea are used as the object group with a few fronds of Leather Leaf mixed into the group. The Sweet Pea angled out to the right is the third stem that forms the last point of the scalene triangle. 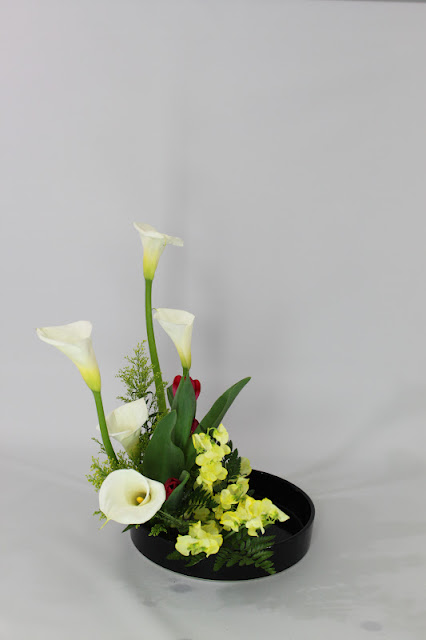 This picture taken vertically helps to show off the beautiful lines of the Calla lily and the beauty of the Upright Style.

After doing this arrangement, I did one in a much smaller container, also using five materials. 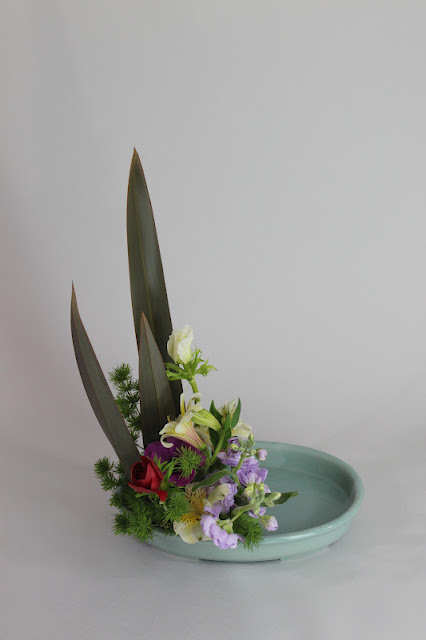 Three leaves of New Zealand Flax, three stems of Anemone, three blooms of Alstroemeria, three stems of Stock, and Asparagus myriocladus is used throughout to connect all the materials. 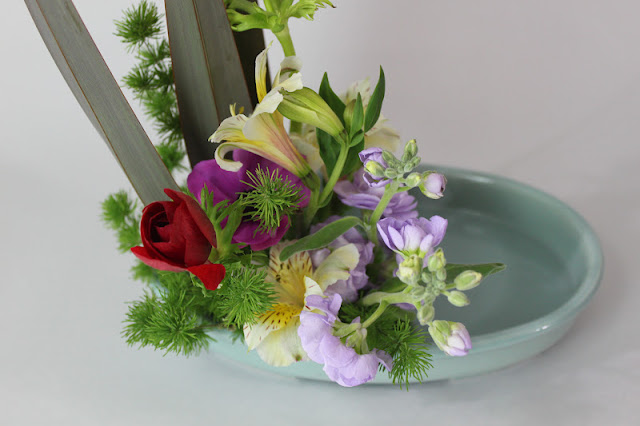 A close-up of the flowers.

And how small is this arrangement? It's hard to tell without a point of reference. This small. Yes, that is a regular pen in front of the container -- small.

And there you have it.

The big and small of ikebana.
Posted by Unknown at 10:44 PM 7 comments:


Hiroki Ohara, the headmaster of the Ohara School of Ikebana, held his first solo exhibition at the Nihon Bashi Takashimaya Department Store in Tokyo from March 30 to April 4. According to the Ohara School of Ikebana's home page, over 45,000 people came to the exhibition over the 5 day period. It was a wonderful exhibition full of beautiful flowers, many of which I had never seen before, beautiful containers, beautiful zoukei sculptures, and the perfect lighting to set it all off. A friend and I spent well over an hour looking at everything -- we actually went through twice just to make sure we saw everything thoroughly. I was glad I was able to attend the exhibition and look forward to his next one.

Here are a few pictures from the exhibition that I really liked. (The picture quality is not the best because I took them with my cell phone's camera!)

I hope you enjoy the pictures as much as I enjoyed his show. 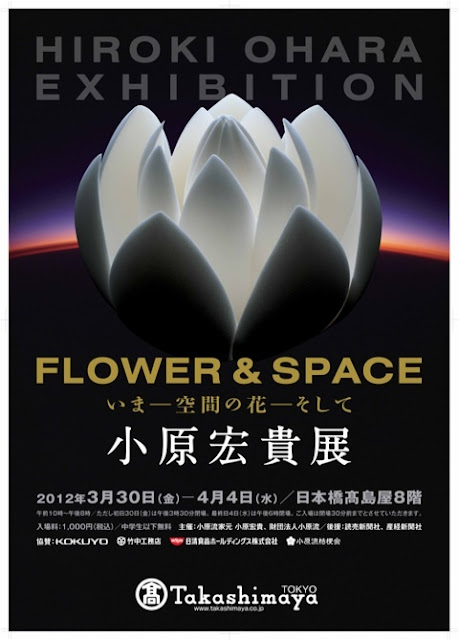 It was a beautiful show that affirmed my passion for ikebana. Hiroki Ohara's arrangements were beautiful to look at inspiring in their imaginative use of flowers, plants, and materials. A wonderful first time exhibition that I would call a great success!
Posted by Unknown at 2:58 PM 6 comments:

Easter. I have such fond memories of the day from when I was a child. Having Easter egg hunts in the yard, falling down the little hill beside the house and all of my goodies falling out of my basket and other kids rushing to take them, picnics at the lake, the joy of finding the eggs with a quarter in it, dying eggs with my mom, going to church, grandma's Easter bunny cake with coconut and jellybeans, and of course, all of the chocolate to be had! It was always a fun day filled with family that I looked to every year.

Here in Japan, Easter is just another day. The country is not a Christian country, so no one really knows about the day. But I think if the Japanese knew how "cute" a holiday it can be -- bunnies, baby chicks, flowers, eggs, chocolate -- they would be celebrating it every year. Lot's of holidays from other countries are observed here, like Halloween and Christmas. Of course, with Christmas, it is just about the decorations and presents for children, but I think Easter would be a big hit here, too. The Japanese love any kind of "cute" they can get their hands on! Anyway . . .

Here's an arrangement I did that would be perfect for Easter. I used bright yellow and pink flowers with a base of green to unify the arrangement. It is in the Circular Form, so it can be viewed from any side, even from the top. A circular form arrangement is a recent form, recent being in the last 20 years, and it is perfect for a western-style home, because it can be placed on a table and enjoyed by everyone sitting around the table. 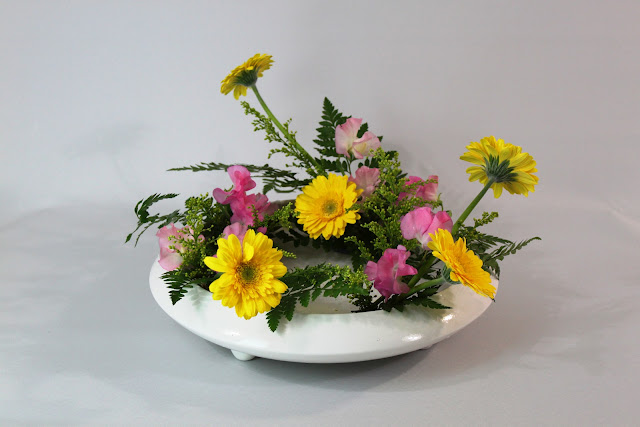 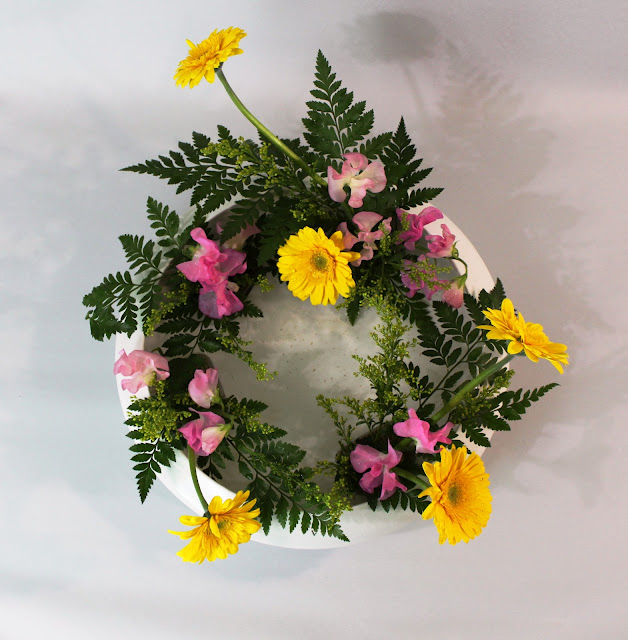 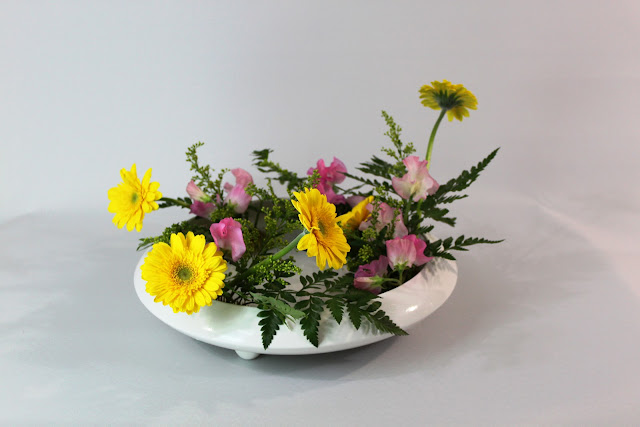 The view from the right. The white of the container can feel very heavy, so the green of the leaves are placed over the edge to help cover up some of the white. 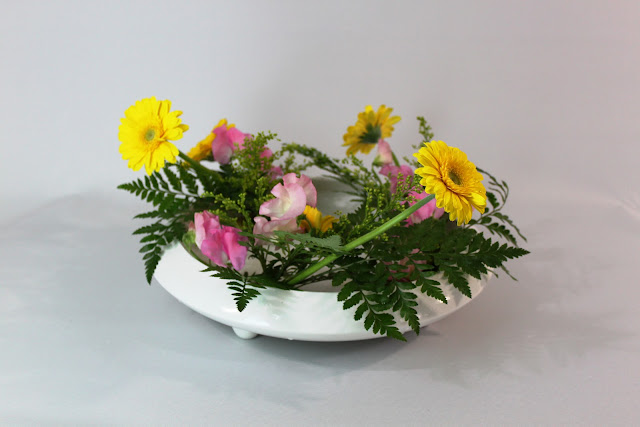 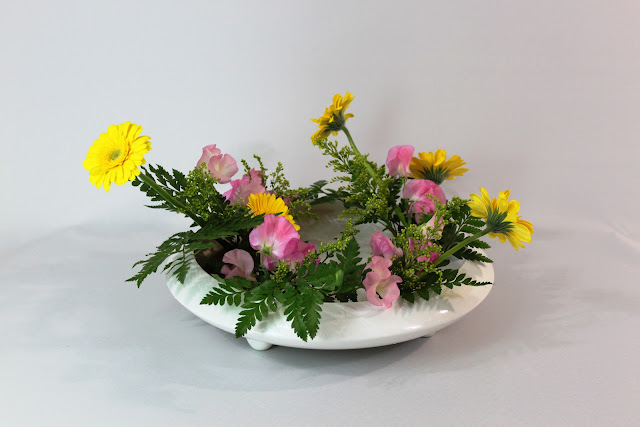 The left side of the arrangement. Green is also placed over the edge to help weaken the strength of the container. 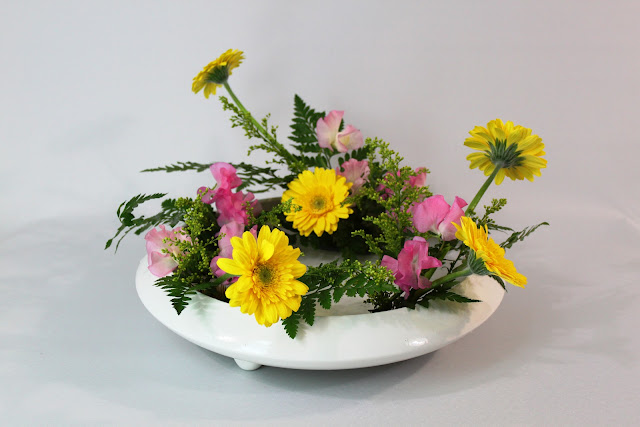 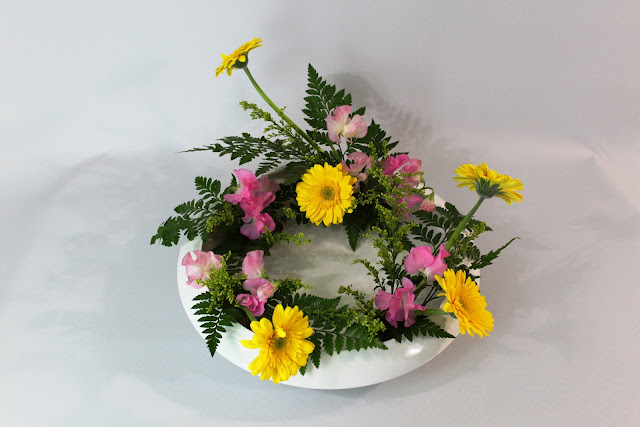 If I had some Easter eggs, I would have hidden some amongst the flowers and greenery. I think the bright colors go well with Easter, and the arrangement also works for a western-style home. East meets west in a pleasing form and brings some happiness wherever the arrangement is placed.

Feel free to leave any comments or Easter memories in the comment section.

I thought I would try to do this post a little different this time, showing you the steps I take to make an arrangement.

I did this landscape a couple of weeks ago when it was still cold and snowy here -- this winter is dragging on forever! This little mountain landscape helped to bring a little brightness and springy feel into my apartment.

Here's what I did: 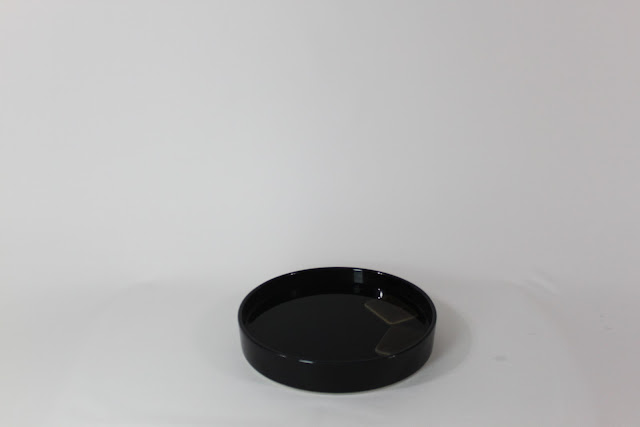 First, I got a round "suiban", or container, and placed two kenzan in the lft hand side. The kenzan will be the place where I create the "ground" in the arrangement. 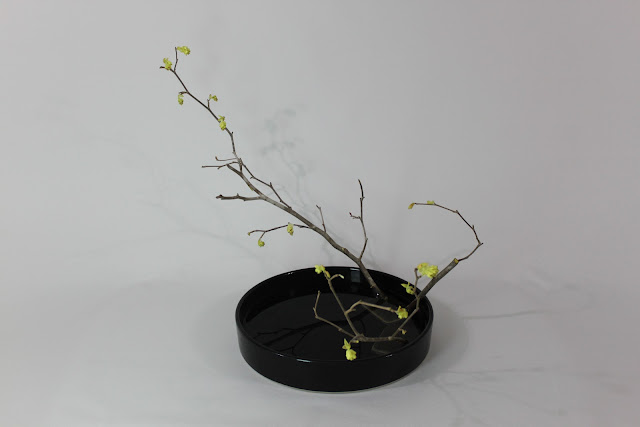 Next, I placed three branches of Spike Winter Hazel to form the basis of the arrangement. One long branch, the main branch, spreading out and up to the left in the back of the suiban; one branch tilting off to the right; and one branch low and to the front of the suiban. These three points form a scalene triangle. Because the branch in the back is long, the branch in the front is short -- opposites create balance. 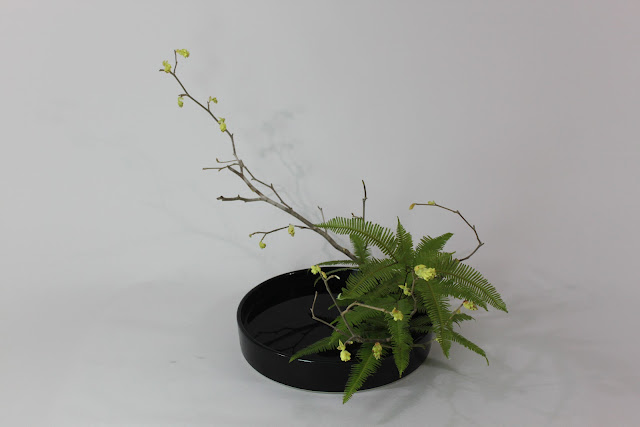 After that, I added the Mountain Fern. With the fern added, you get the feeling of some "ground" being in the arrangement, thus a landscape arrangement. The branches and the fern are intermingled, giving the arrangement a natural feel.

The mountain fern is a beautiful material, but it does not take in water well. The tallest branch of the fern, seen in the front, actually only lasted about 3 days, and then it started to dry up and wilt. It is sad to see the materials die so quickly, but it makes you appreciate their beauty even more. 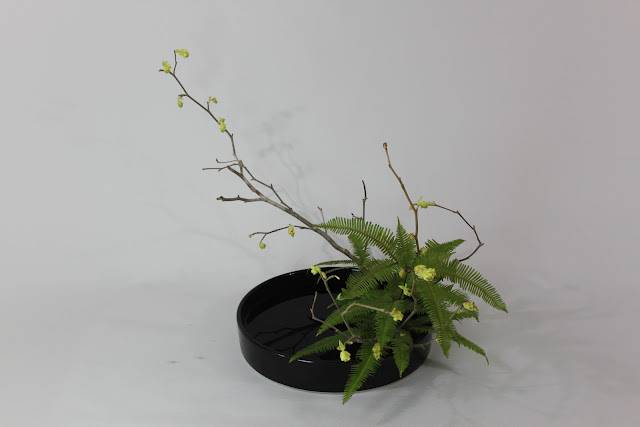 Can you see the difference? I added another tall branch to the middle of the fern. It acts to connect the space from the front to the back, making the arrangement feel more cohesive. 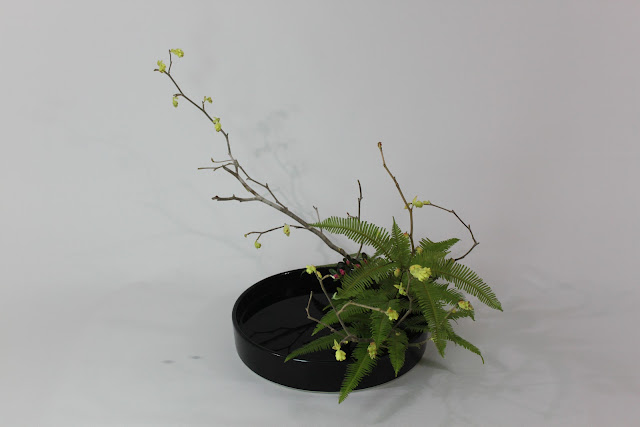 A bit of red can be seen in the back of the arrangement. The Azalea is placed low and in a clump, the way it would naturally grow this time of year. Having it just peek through the fern and branches instead of being in the forefront helps to keep the Spike Winter Hazel the main material of the landscape. Plus, when something is hidden in the arrangement, it pulls the viewer into the landscape -- a little ikebana magic. 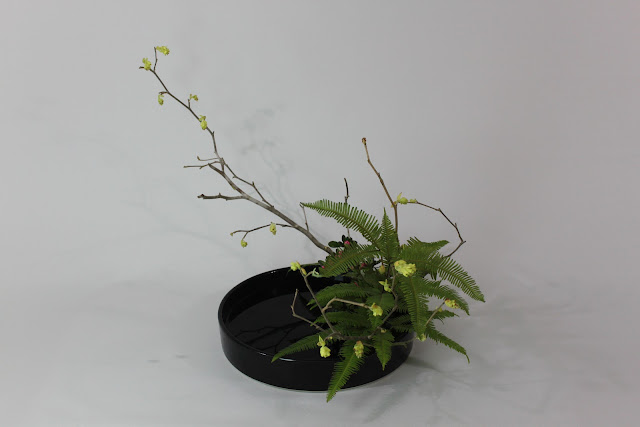 Another branch of the azalea was placed a little higher in the arrangement, tilting forward, also helping to bring the viewer into the landscape. 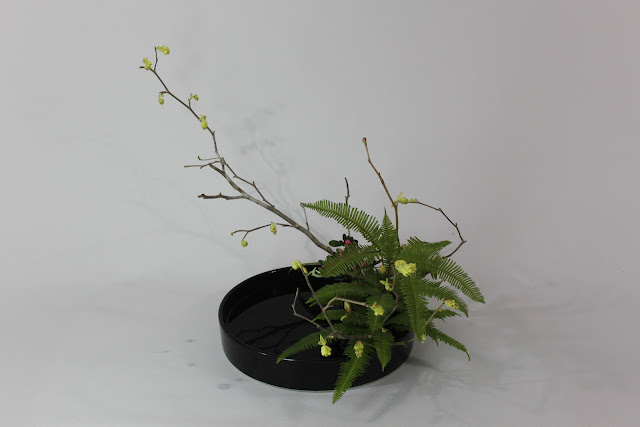 Finally, one more branch of the Spike Winter Hazel was added to the front of the landscape, down low and in the fern. Having something in fours is not good. In Japanese, one way to pronounce four is the same as the word death, so having something with four is a little taboo. Some buildings don't even have a fourth floor. It's like the number 13 in western cultures. So, the branch is added to get rid of the "death" in the arrangement. 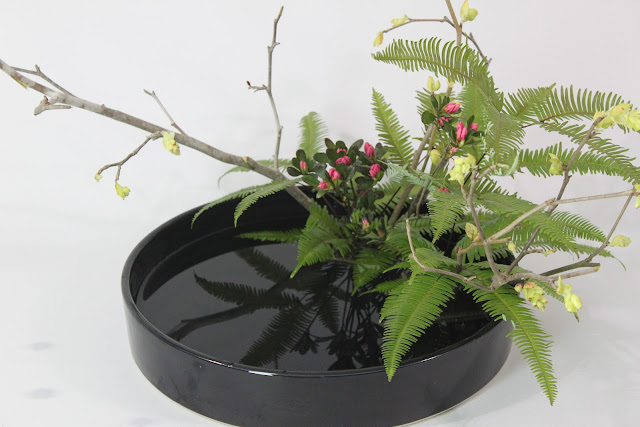 A view from the side so you can see the azalea in the landscape. The fern has also been placed low in the arrangement to cover up the kenzan. 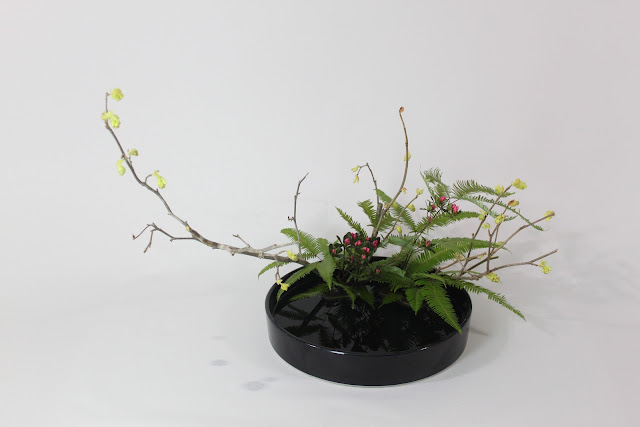 A wide shot from the side to show how much area the landscape takes up. Having the branches extend beyond the confines of the container makes them fell larger than they are, and also gives a sense that the landscape continues, but we just can't see it. You can also see the tall filler branch in the middle that helps to connect the main branch on the left and the short branch on the right. Without this branch, the branches would fell disconnected and out of balance. 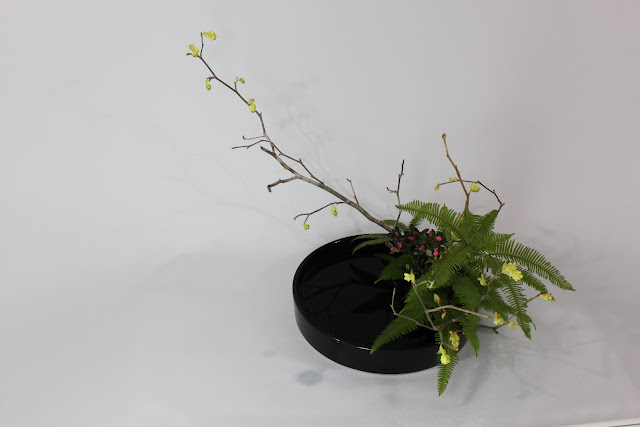 The finished landscape tweaked a bit for balance. This shot was also taken from a little above, showing more of the azalea.

Only three materials were used -- five branches of Spike Winter Hazel, six stems of Mountain Fern, and two stems of azalea. A minimum of materials that produces a maximum of beauty -- again, the magic of ikebana!
Posted by Unknown at 5:07 PM 6 comments: