Since ancient times, rhodea has been used extensively in artificial leaf groupings of the greatest ingenuity in rikka and other floral styles. In the ikebana of the Ohara School, one-clump arrangements of rhodea in fixed leaf groupings appear in the Traditional Method in both the Landscape Arrangement and in the Color Scheme Arrangement, and both leaf groupings are governed by strict rules.

Rhodea is always composed in a single group of eight leaves -- en even number. This method makes the most of the plant's natural growth pattern and is the major feature that distinguishes rhodea from most other materials.

If one observes rhodea growing in pots and elsewhere, the leaves will be seen to grow symmetrically from the center of the clump, with opposing leaves emerging at about the same time. This growth pattern is represented by the application of the techniques of the one-clump method to create the best, most unified form with a fixed number of eight leaves.

It should be noted that in its natural state, rhodea produces leaves that emerge sideways to the right and left, and the plant's appearance as a whole lacks forward and backward depth. In a work of ikebana, this would not produce a very beautiful effect, nor would it allow for the addition of other materials. Thus, when rhodea is arranged, the leaves are grouped not according to their natural appearance, but lengthwise as if viewed in depth from front to rear. Consequently, in what is regarded as the parent grouping, the same number of leaves -- three in the rear and three in the front -- are positioned with their upper surfaces facing the center of the clump. At the side of this six-leaf grouping, two leaves represent the so called child grouping. Long, large leaves are used in the parent grouping, and small, short ones in the child grouping. The red berries of rhodea are positioned near the central area of the clump.

In the Traditional Method in the Landscape Arrangement, rhodea is always composed in the Upright Style in the Near-View Depiction. Therefore, the groupings are created with leaves in their natural lengths regardless of the size of the suiban.

As you can tell from the quote above from the book by Houn Ohara, rhodea has a long history in ikebana and is very specific in the way in which it is arranged. It is a winter material and can be used not only in the Traditional Method, but can also be used in a rimpa arrangement and also in a nageire arrangement. It is a refined material and looks gorgeous in it's arranged state.

I was lucky enough to be able to do an arrangement this winter using the material. It is expensive (about $20 for 10 leaves and one clump of berries), and is getting harder to find here in Japan. Usually, it is used during the new year, but can also be used throughout the winter. A couple of weeks ago (yes, this post is a little late in getting up), there was one set of leaves and a clump of berries left over from the new year at the flower shop, and they were kind enough to give me a discount on them (about $10)! I was excited to try my hand at this very technical yet beautiful arrangement.

As mentioned above, there are set rules for the placement, length, and angle of the leaves. The position of the berries is also set. Following the rules produces a beautiful one-clump depiction of the material that gives a sense of movement within the container. The diagram below, also taken from the above mentioned book, shows the arranging method for rhodea and where to place each leaf within the shippo. 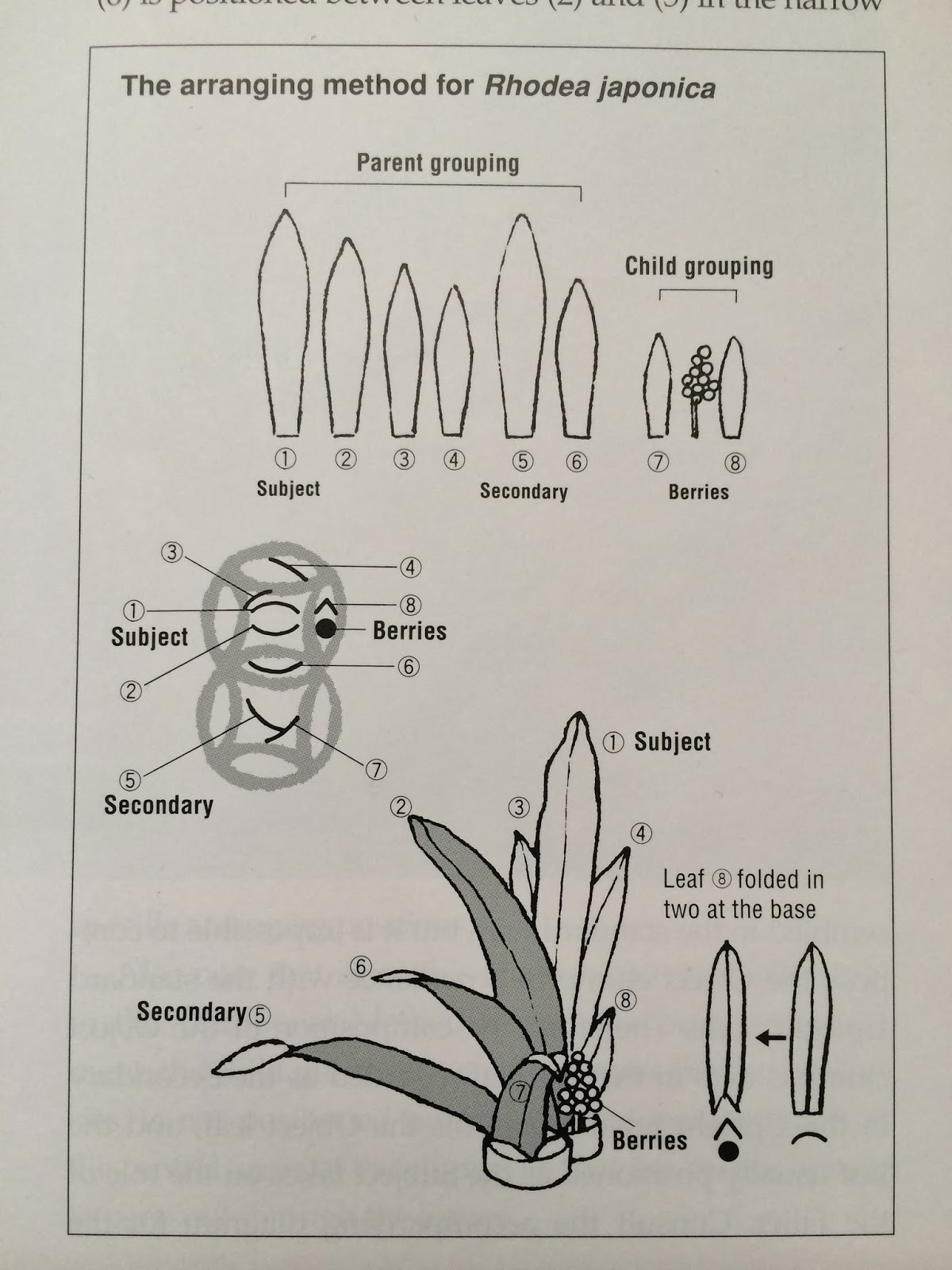 Using this as a guide, along with advice from my teacher, I was able to create a beautiful clump, although it took me about an hour to get everything correct! Needless to say, I was very happy when I was finished. After arranging the rhodea, I covered the surface of the suiban with club moss. It is important to cover the entire surface of the container with the club moss because it is winter and also because rhodea is in no way associated with being near the water. I was lucky enough to be able to use club moss that my teacher had used for an arrangement she did the week before. If I were to have had to cut and arrange all of the club moss, I would have had to spent another hour on the arrangement, which would have been fine with me; but I'm glad I didn't have to! Last, I used small chrysanthemums to finish the arrangement. A small group positioned at the base of the clump near the berries, and another small group used as the Object and its filler. 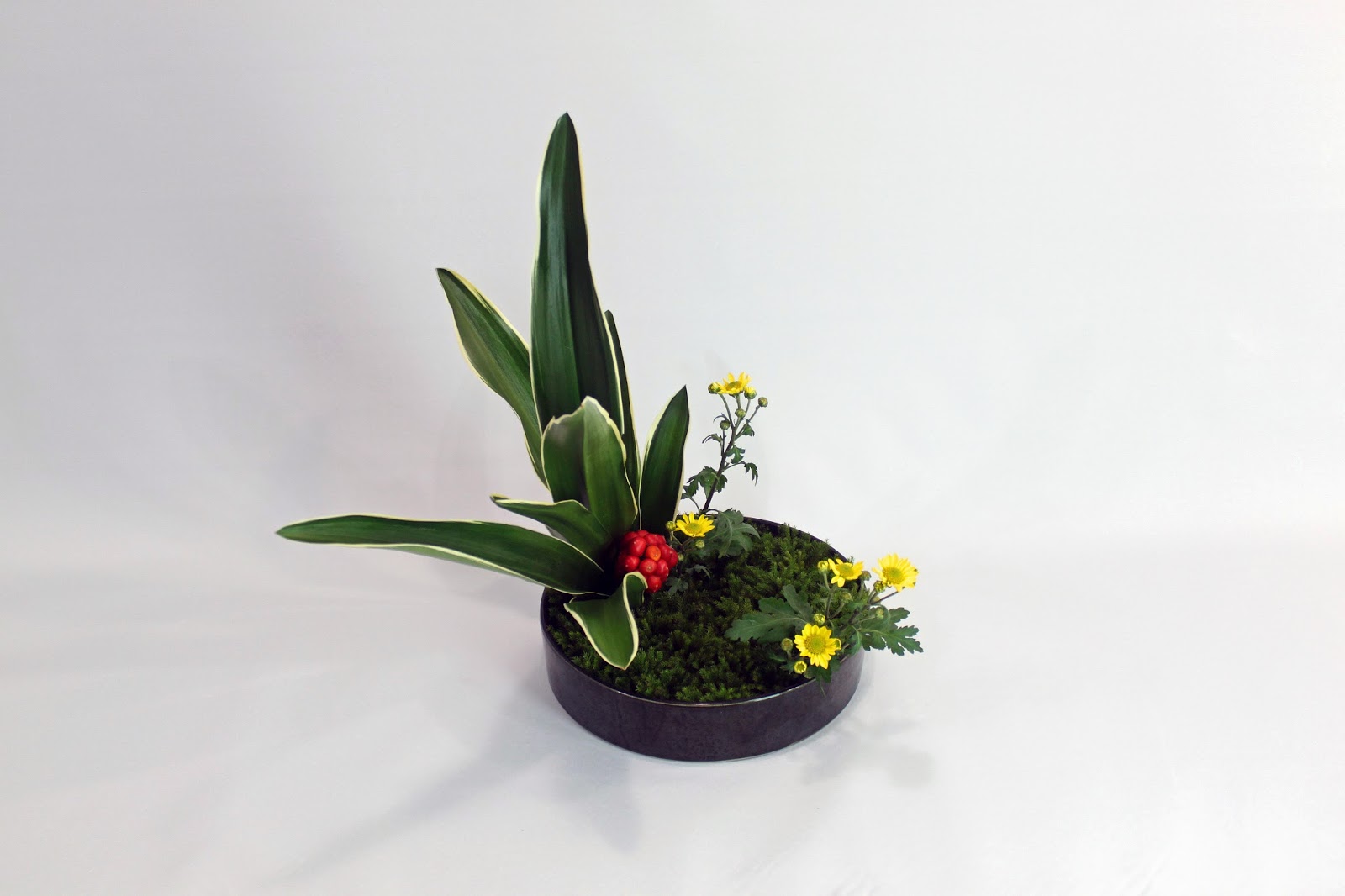 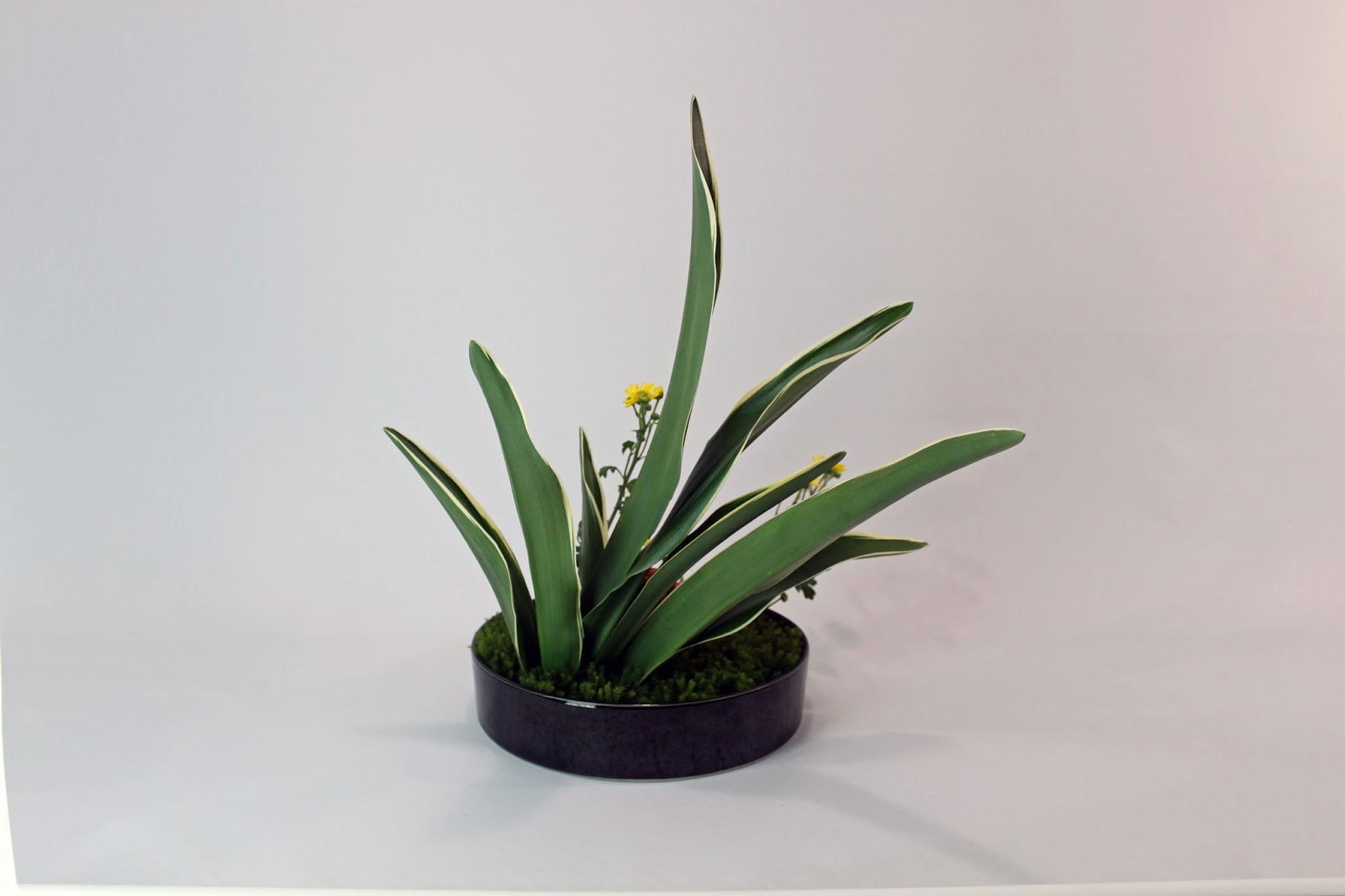 Here's a view from the side to show how the leaf group tilts forward to bring the viewer into the arrangement. 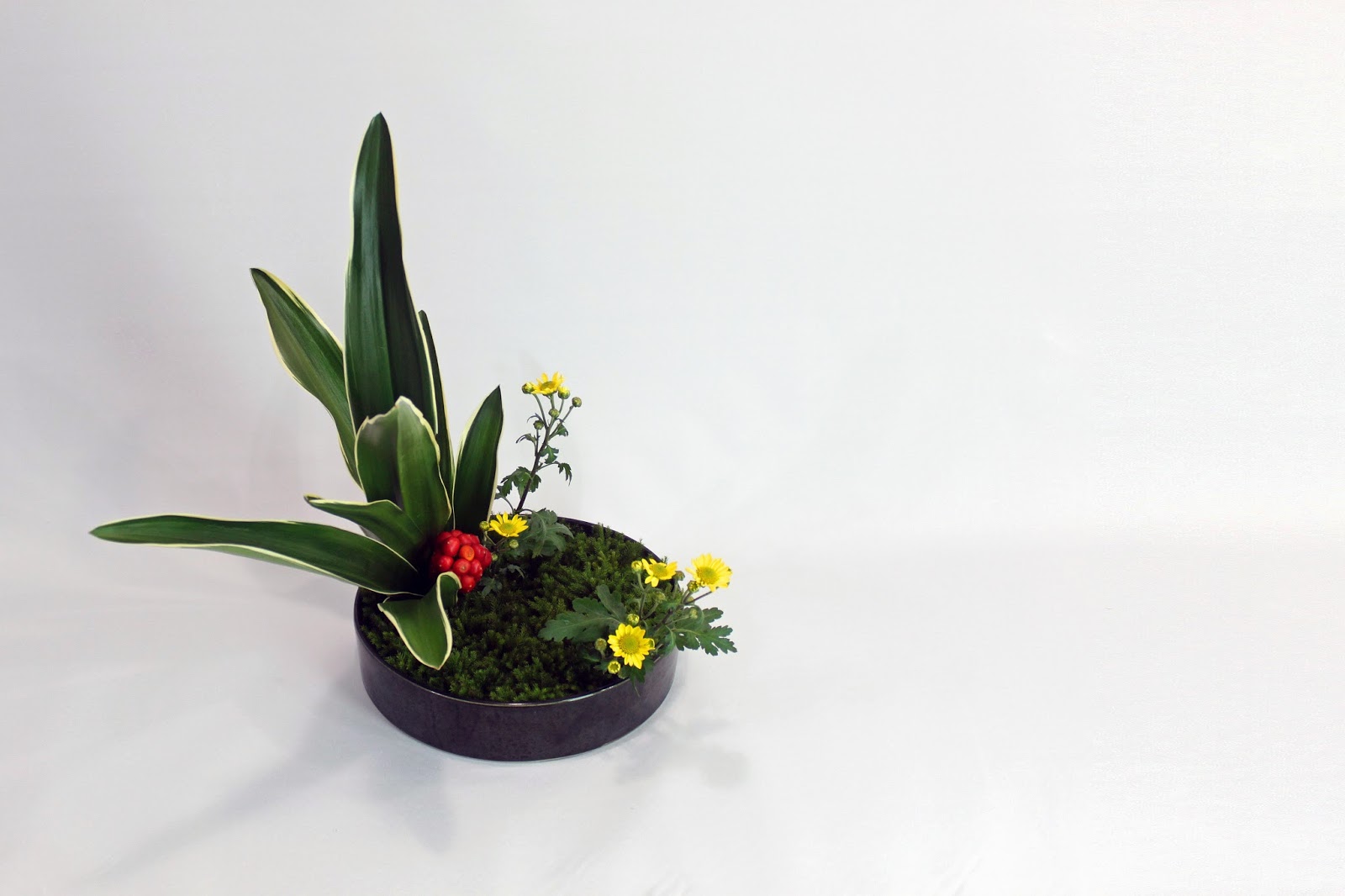 The Landscape Arrangement form is truly unique to the Ohara School of Ikebana. Respecting the seasonal characteristics and natural growth patterns of plants, an arrangement that expresses the beauty of a natural scene can be captured in the small confines of a container. Being able to do this takes years of practice and lots of skill. I still have a ways to go on my ikebana journey, but I am enjoying the "views" along the way.

I hope each of you are doing well in your part of the world!

Please feel free to leave a comment below. I would love to hear about your ikebana journey.
Posted by Unknown at 1:12 PM 4 comments:

Amaryllis always reminds me of my grandmother.

She had a big  picture window in her living room with a big "table" in front of it (which was actually the old console of their TV with a cloth over it). It was filled with different potted plants. But my favorite were the amaryllis. She had all different colors -- red, pink, white, red with white spots, and I can even remember a yellow one. They always bloomed during the winter months, but she was good enough that she could also get them to bloom out of season.

For Christmas one year, she gave all of the grand kids a potted amaryllis bulb that we would have to water and could then watch grow. I loved watching the single stalk rise up out of the bulb and bloom in a colorful display of trumpets all around the top of that lonely, green stalk. I had mine for several years before I finally let it die.

Now every time I see an amaryllis, it makes me think of her. She was a simple country woman who loved to garden and display her flowers on the table during the summer months. And I know she enjoyed the beauty of the amaryllis that she had in the picture window -- she had so many!

This last week, I did an arrangement using amaryllis and it made me think of her.

I think she would like this arrangement very much. 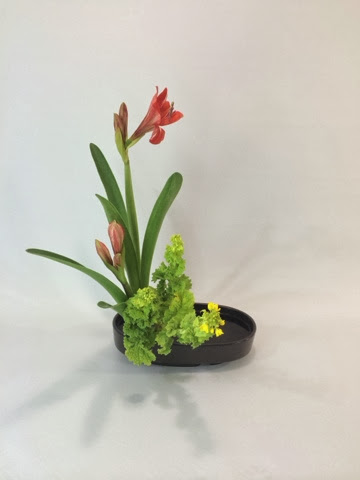 Do you have any special memories of your grandmother? Let me know in the comment section below.
Posted by Unknown at 7:22 PM No comments: